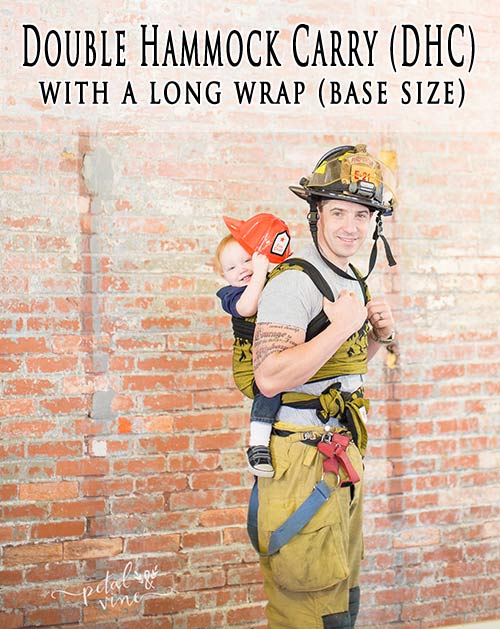 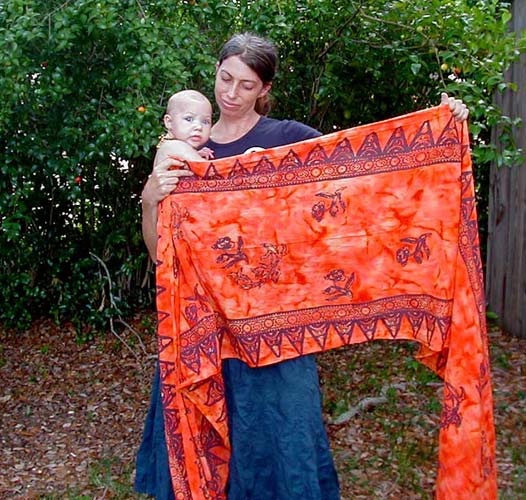 Step 1.  Find the center of your wrap and slide your hand down 18 inches or a couple of feet. 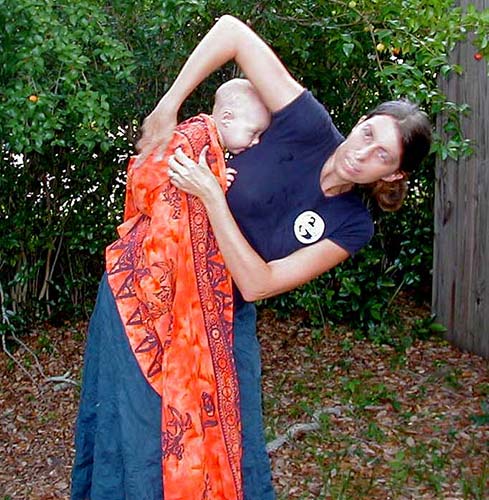 Step 2.  Put the new middle on your baby’s back and put baby on your back (I’m using the hip scoot here). 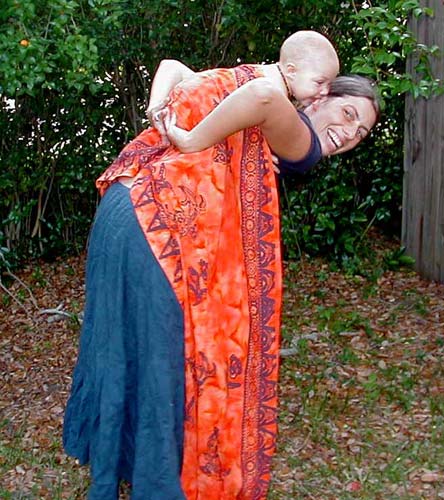 Step 3.  Center baby on your back and spread the wrap over baby’s back. 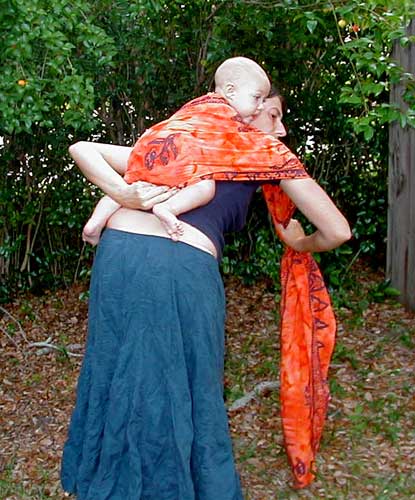 Step 4.  Create a seat under your baby’s bottom with knees tucked up.  Bring the short end of the wrap over your shoulder and the long end under the opposite arm. 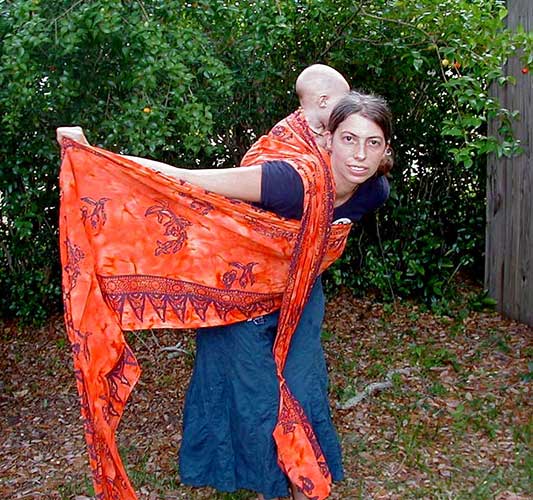 Step 5.  Bring the long end of the wrap from under your arm, straight across your chest.  Put the short end of the wrap coming over your shoulder between your knees to hold it. 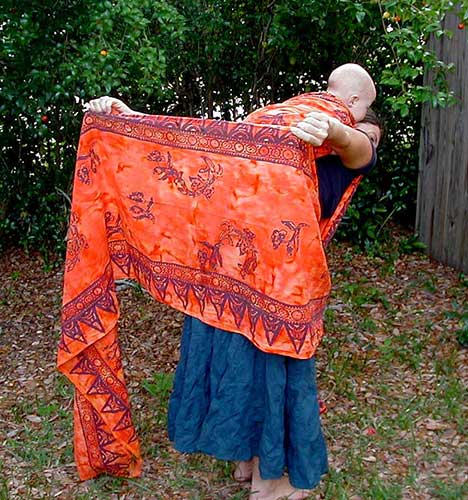 Step 6.  Pass the wrap to your other hand behind your back and spread your hands wide apart so that you can place it over your baby without having to reach so far back. 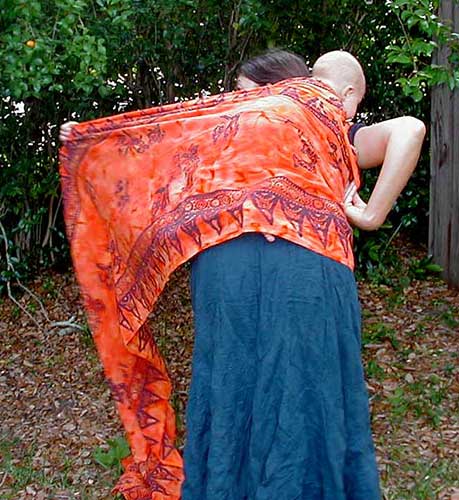 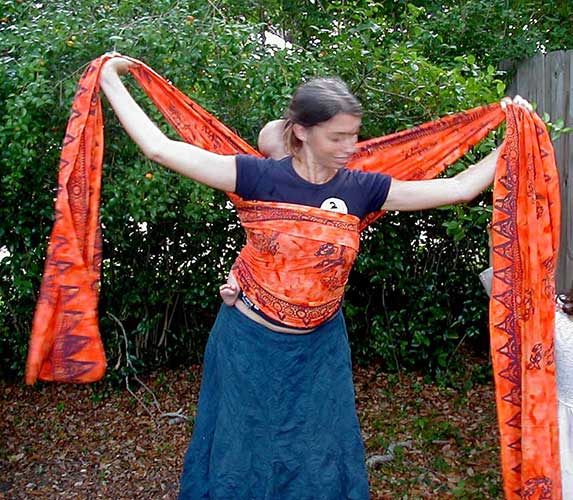 Step 8.  Take a wrap end in each hand and pull them upwards and outwards (to make a V shape) to tighten the wrap across your torso and across your baby’s back. 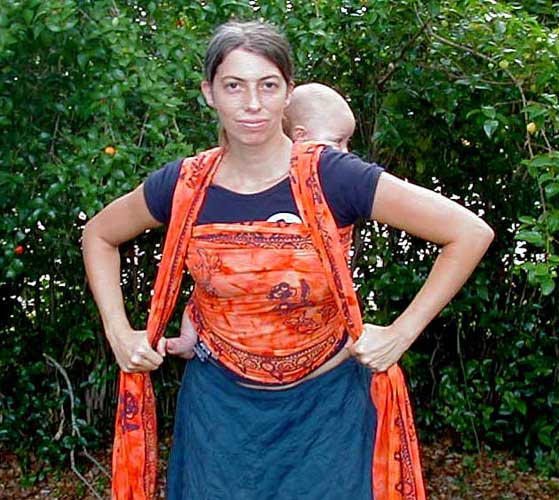 Step 9.  Bring both ends over your shoulders and straight down to go under the same arm. 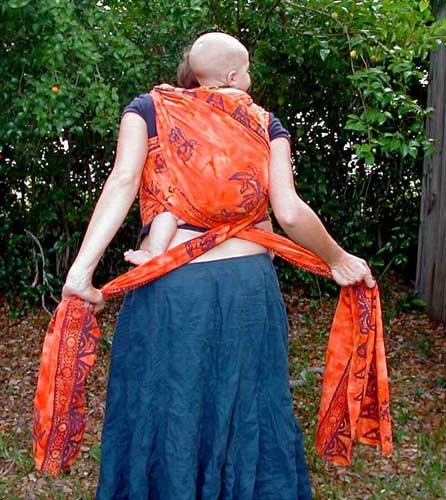 Step 10. Bring the wrap ends behind your back and switch hands to cross the wrap under baby’s bottom. 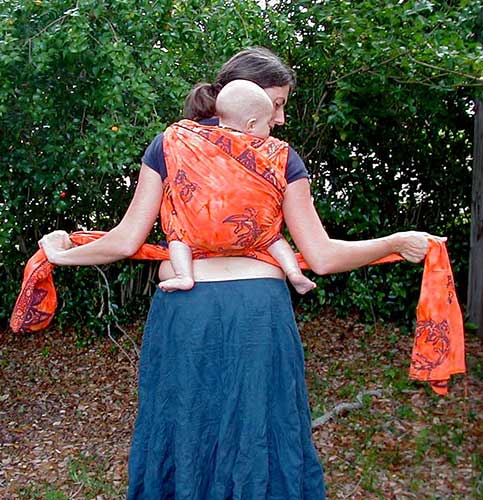 Step 11.  Bring the wrap ends under your baby’s legs. 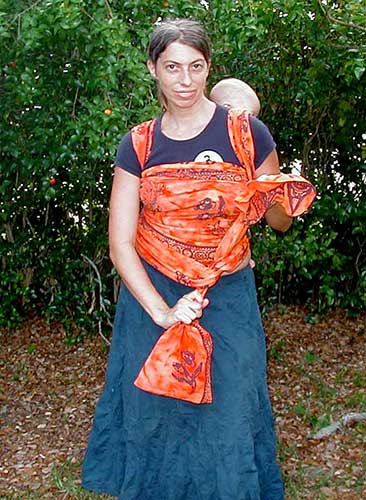 Step 12. Bring around your waist and tie a double knot at your waist. 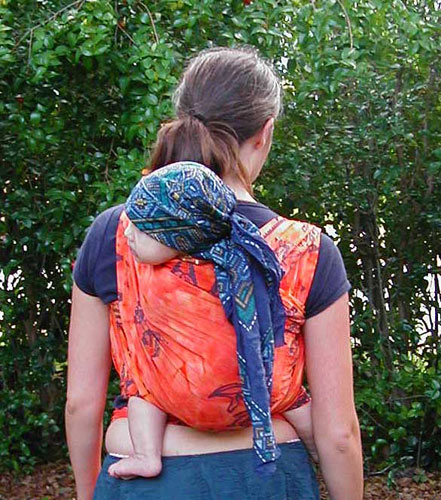 Double Hammock Carry: view from behind: baby is in two sling (or hammock) passes. 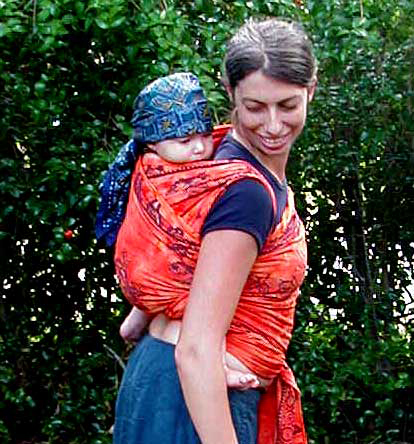 Double Hammock Carry (DHC) is super comfortable and baby has a great view over my shoulder.

In a woven wrap Double Hammock Carry, baby’s arms can be tucked inside the wrap – perfect for a young baby or a baby needing head support – or arms and shoulders can be out of the wrap for a baby or toddler who doesn’t want to feel restrained.

Wendy’s Double Hammock Carry is a wiggle-proof carry that has the comfortable horizontal torso pass of a DHC but adds an even more secure seat for babies who tend to ‘pop the seat’ by straightening legs to make the passes slide up over their bottoms.  With two passes going between the legs, babies cannot pop this seat!

DHC TAS  (tied at shoulder) has the same horizontal chest pass and two hammock passes for baby but instead of a cross between baby’s legs at the end, it has one bunched horizontal pass that goes straight across behind both knees, and then the carry ties at the shoulder.  As a result there is no tie around the waist, and it can be done with a shorter wrap.  This is the centered version of DHC TAS which means you begin with the wrap centered on baby’s back, unlike a standard DHC. Click here for photo tutorial for DHC TAS.

DHC TUB (tied under bottom) is similar to DHC TAS (tied at shoulder).  It has the same horizontal chest pass, the same two sling (diagonal) passes over baby, but the two wrap ends come together in the back and knot is tied under baby’s bottom (whereas in the TAS version, one wrap end goes behind and comes around to the front to tie to short end at the shoulder).  This video was made when our family was living in an RV and touring the country.  The Grand Canyon seemed like the perfect backdrop for a quick tutorial since I needed to wrap baby up for a hike on the trail anyway!  I like to think that our chattering daughters (age 2 and 7) provide charming background noise 😉

For those interested in Winter Wrapping, I had my son in his jacket and wrapped over him without a jacket on me.  Afterwards I will put our Kindercoat (babywearing coat) over both of us.