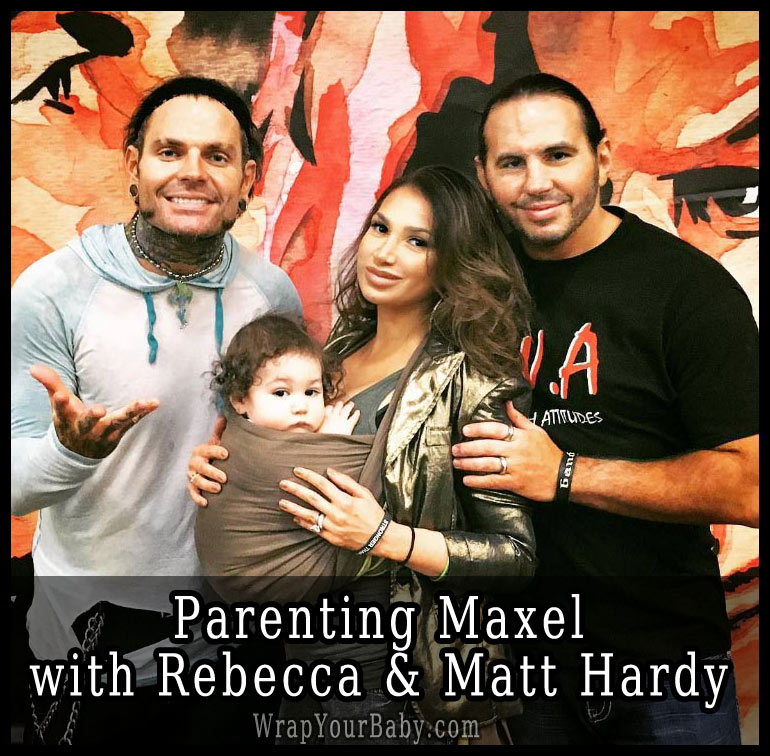 Reby’s pregnancy and the birth of Maxel led to a major transition for her career and one that accompanied a dramatic and wildly successful shift in the family’s wrestling story line.

In the meantime, Reby and Matt Hardy have found their footing as parents, with parenting practices that some would describe as attachment parenting. But Rebecca Hardy describes her  parenting style as Crunchy Glamour.

She didn’t expect to be into all these natural parenting things. When she was pregnant, she planned to hire an au pair. She bought the most ridiculous baby carriage she could find.

“But once he was here, I always wanted him with me.” 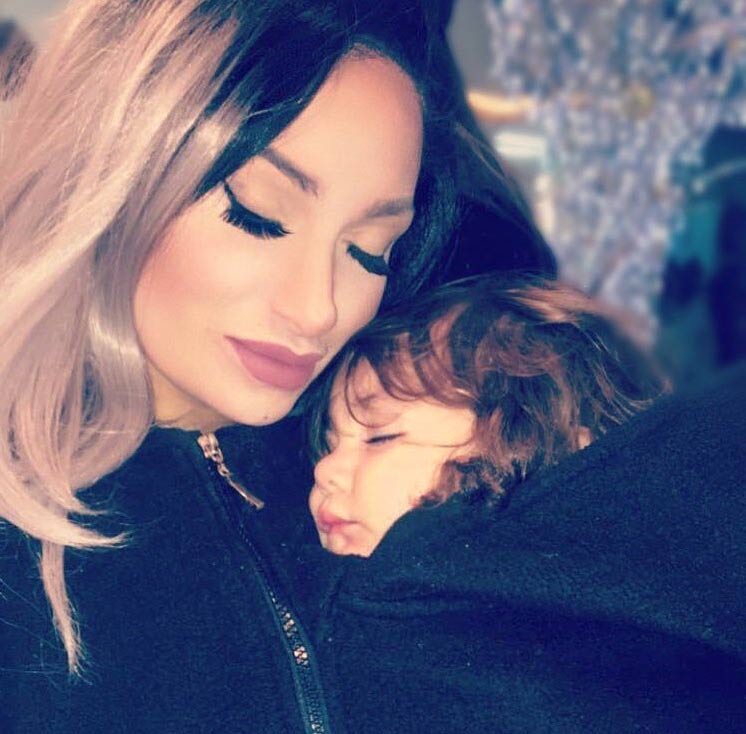 Reby Sky and Maxel Hardy together in a babywearing jacket that goes over a baby carrier.

Like so many new parents, Reby learned about baby carriers from her midwife. And that fine carriage? It was used about four times, mostly to appease her mother.

Maxel was a clingy baby and being wrapped on mom kept him happy.

“I thought bouncers and swings would be convenient,” Reby tells me. “But it was babywearing that was convenient!” 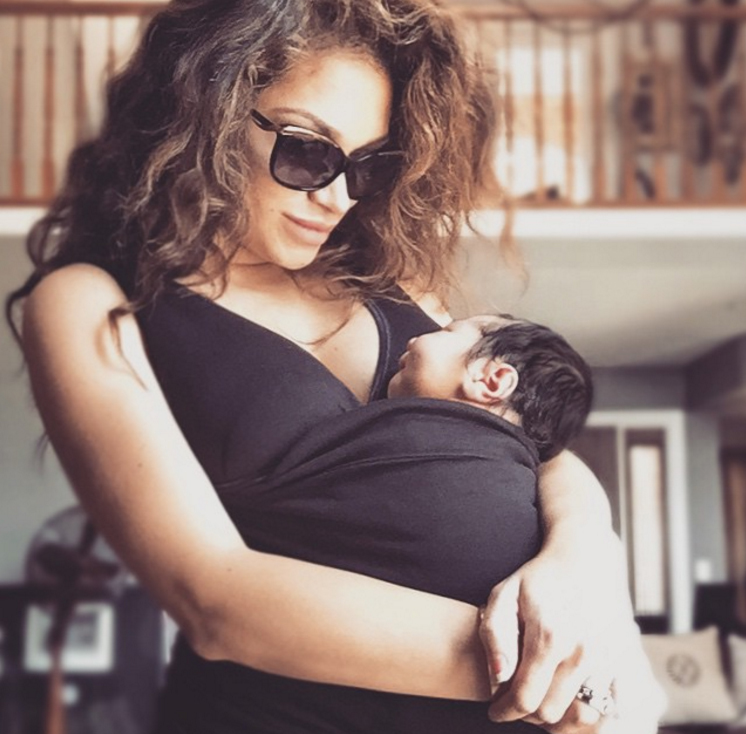 “My whole family thought I was nuts,” Reby remembers. “I was the first in my family to nurse and babywear.”

And what about Matt Hardy? How did Maxel’s dad evolve into a crunchy dad? He could see that it was the best for baby, and he could see how convenient babywearing was. Once he tried wrapping for himself, Matt Hardy told his wife, “This isn’t as hard as it looks!” 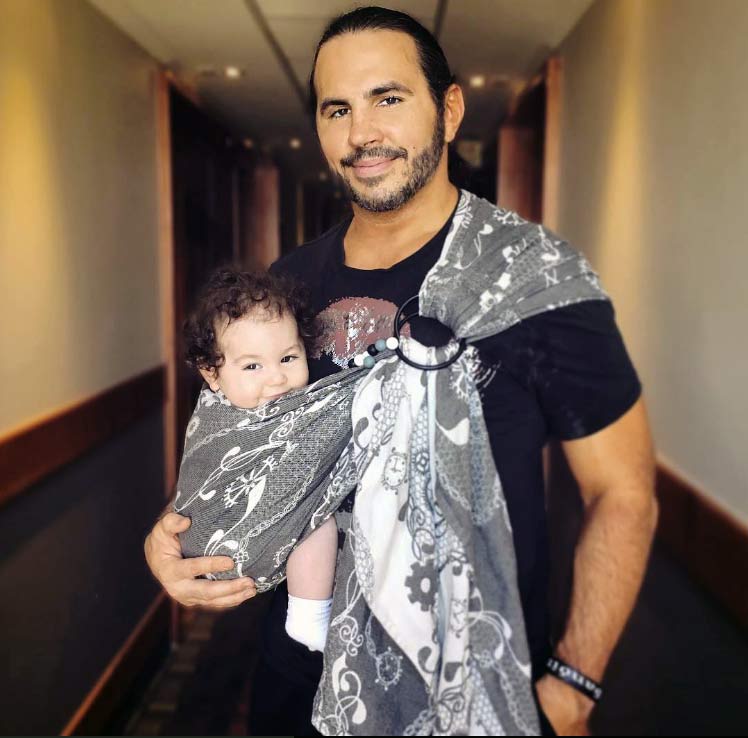 Reby laughs when people think babywearing is hard work. “It’s just a baby! It’s not like I’m carrying around your Uncle Mike!” 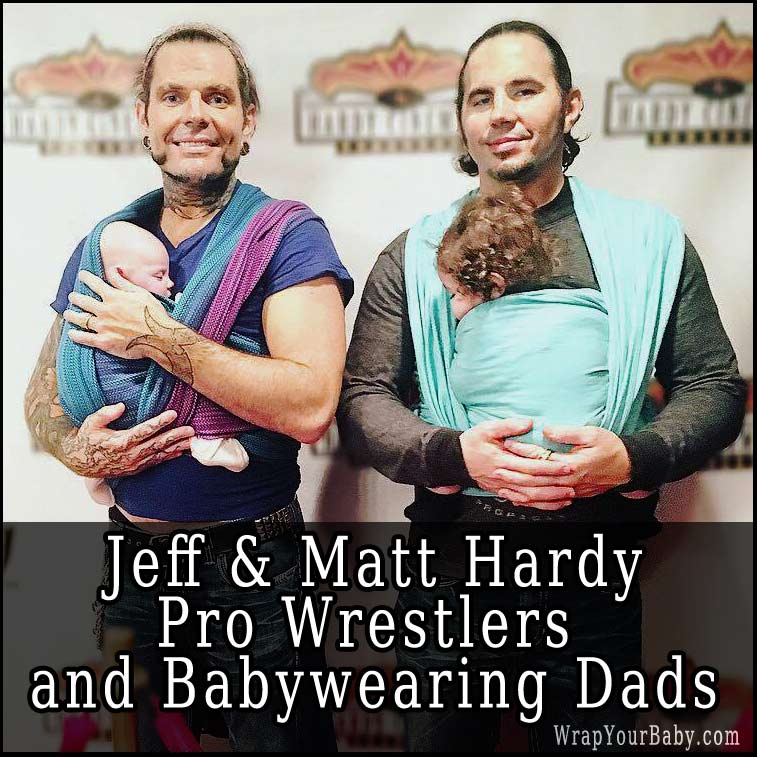 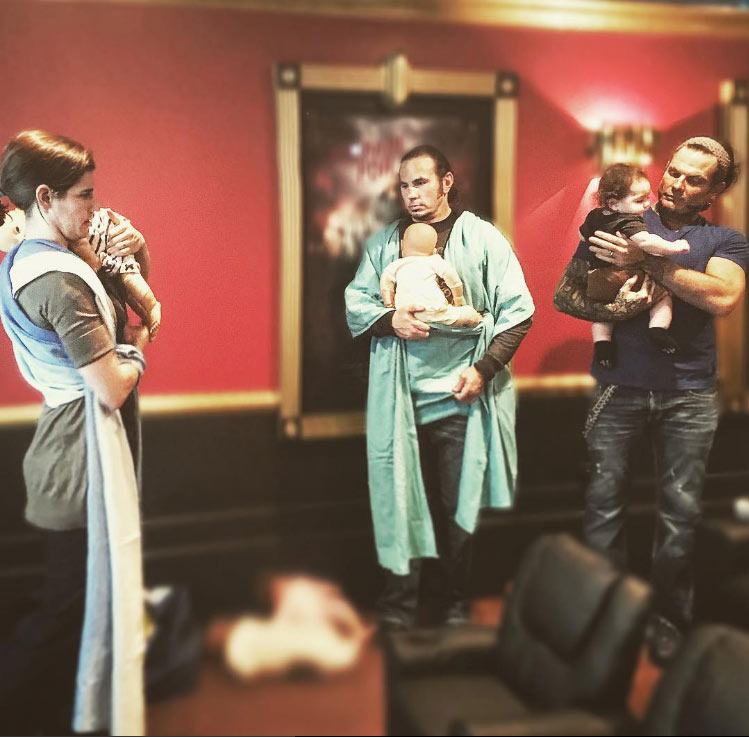 Matt and Jeff Hardy learning to wrap at a class with Wrapping Rachel of YouTube fame.

When Reby became pregnant with Maxel, she tranisitioned from Wrestler to a managerial and speaking role and then to a musical role, playing the intro when husband Matt Hardy makes his entrance.

Reby needed something to do with Maxel while playing the piano during the entrance. “I can’t have him just standing there on stage with my back to him!” 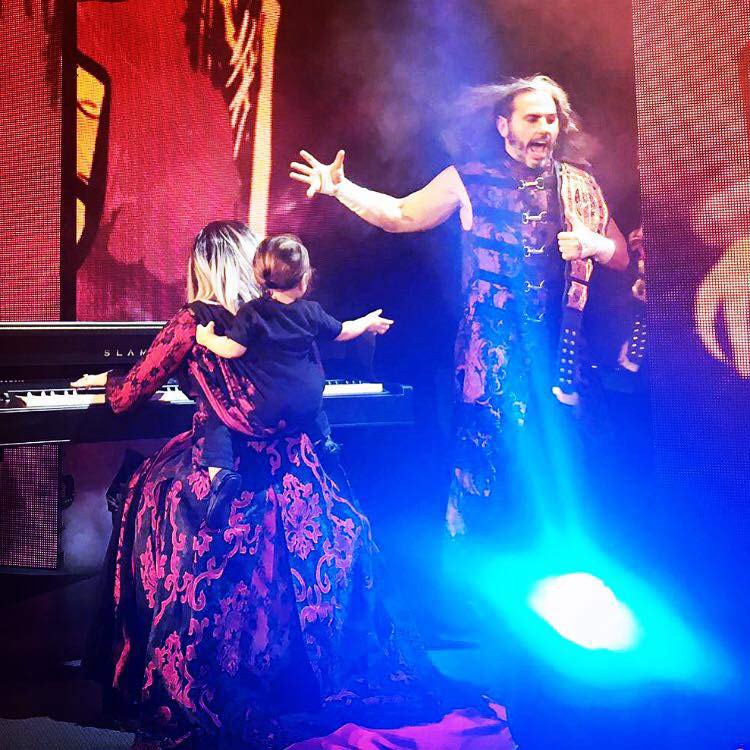 That’s when she found the Gothic Roses wrap. She thought, “I’m going to plan my whole wardrobe around this wrap.” The Hardy team had been about to change from black/red to black/silver costumes, but Gothic Roses, with dramatic red roses on a black background, changed that. They stuck with black/red and Reby had part of her outfit custom made to compliment the wrap. 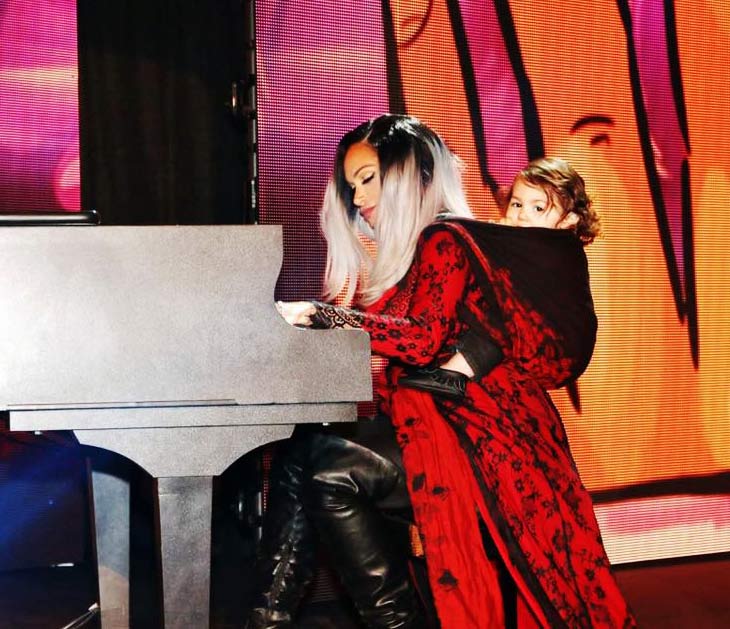 King Maxel chilling in a back carry in Natibaby Gothic Roses while Queen Rebecca plays the music for Matt Hardy’s entrance.

She had worn Maxel for some of the backstage vignettes in the past but Gothic Roses was the first wrap she wore onstage on Live TV. “I got so much great feedback,” she said. People thought it was cool and wanted to know all about it.

Reby says it would have been impossible to do her job and keep up with her baby without the conveniences of babywearing and breastfeeding. “They kept our family together – I would never see my husband otherwise!” 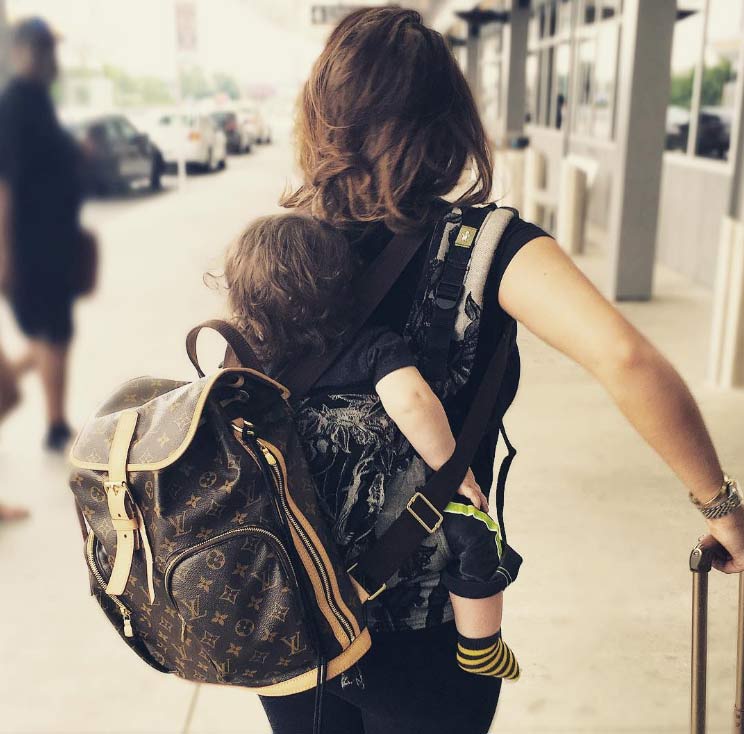 Reby Hardy pulling a suitcase, with Maxel on her back in a babycarrier, backpack diaper bag over top.

Wrapping has immensely impacted the Hardys’ lives. Anyone who has followed their family’s recent story arc in Pro Wrestling knows how central Matt Hardy’s family has been to the story line. None of that would have been possible without babywearing.

“My whole family travels for wrestling,” Reby says. She tells me that without babywearing and breastfeeding, there would be so much gear to pack – carseats, strollers, etc. It just wouldn’t have been practical. And Reby and Maxel would have ended up staying home instead of traveling with dad and being part of the show. 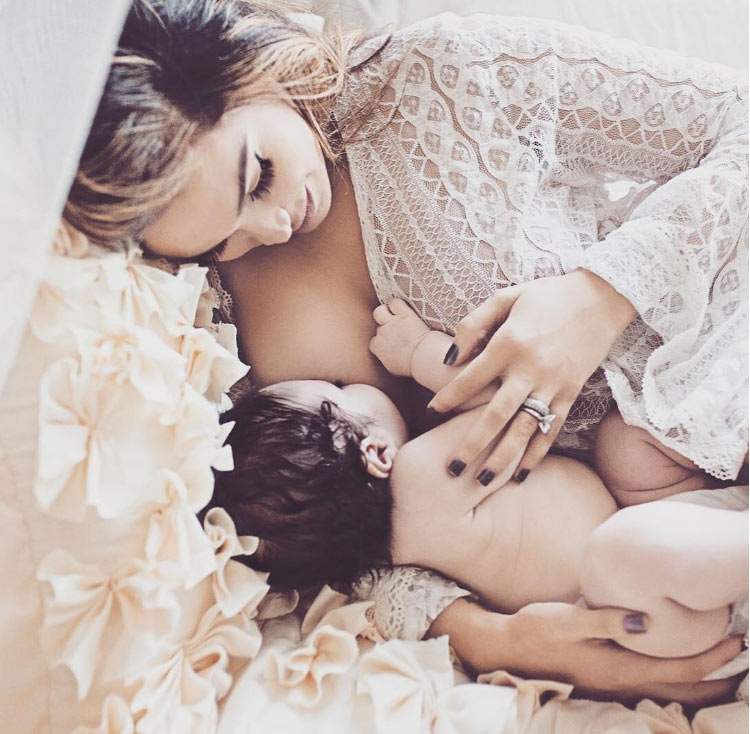 “I wanted to nurse all my life,” Reby tells me. There are so many trials that nursing moms face so I try to normalize it as much as I can.

The World Health Organization & UNICEF recommend nursing your baby for 2 years for optimal child health benefits & development and I’m proud to say that Dollbaby is right on time. It has been a tough journey at times, but so worth it, knowing I’m providing antibodies & nourishment that ONLY my milk can. This is not an opinion, nor a debate; these are facts 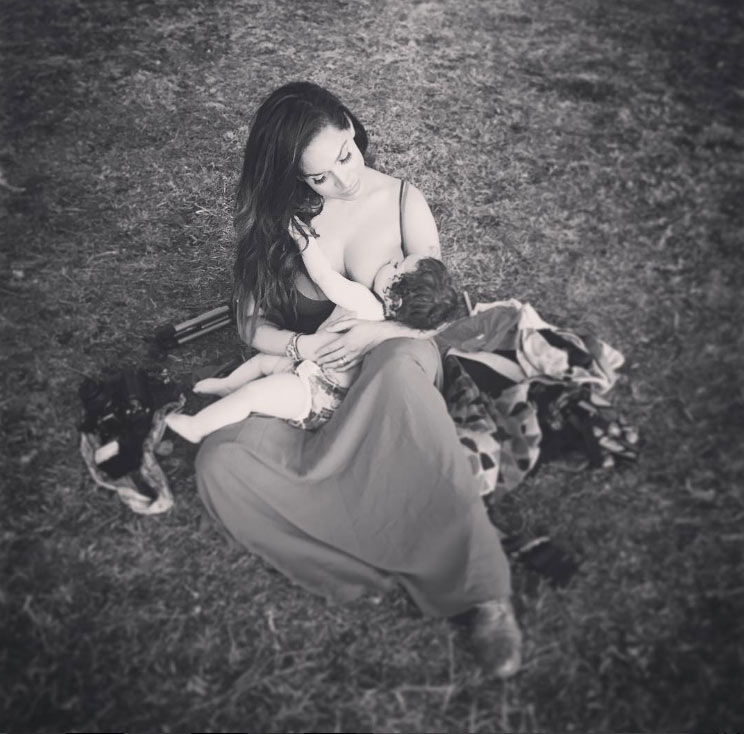 “I had friend who used cloth diapers and I used to look at them like they had 7 heads,” Reby laughs. But just look at her now, a cloth diaper addict! 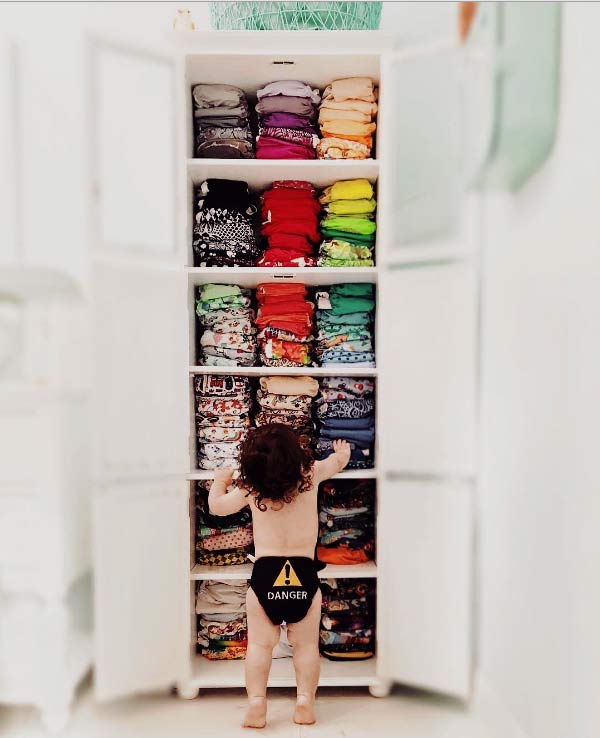 Cloth Diapers can save a ton of money and trash, but they are so much fun there is a real DANGER of going overboard! 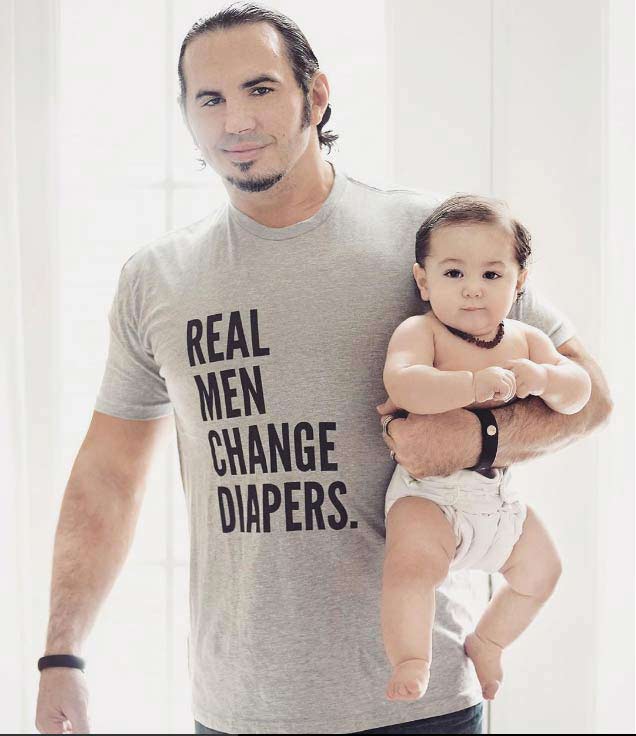 Matt Hardy changes diapers, and they are cloth diapers.

I asked Reby if there were other wrestlers who were moms and if they had found similar parenting styles. Reby tells me it’s the wives of wrestlers that she has seen adopting crunchy parenting tactics most. Reby has become an evangelist for cloth diapers and babywearing and she’s converted a lot of people behind the scenes in the wrestling world.

Now Matt and Reby Hardy are expecting baby #2 in June 2017. Maxel will be 2 years old when he becomes a big brother. 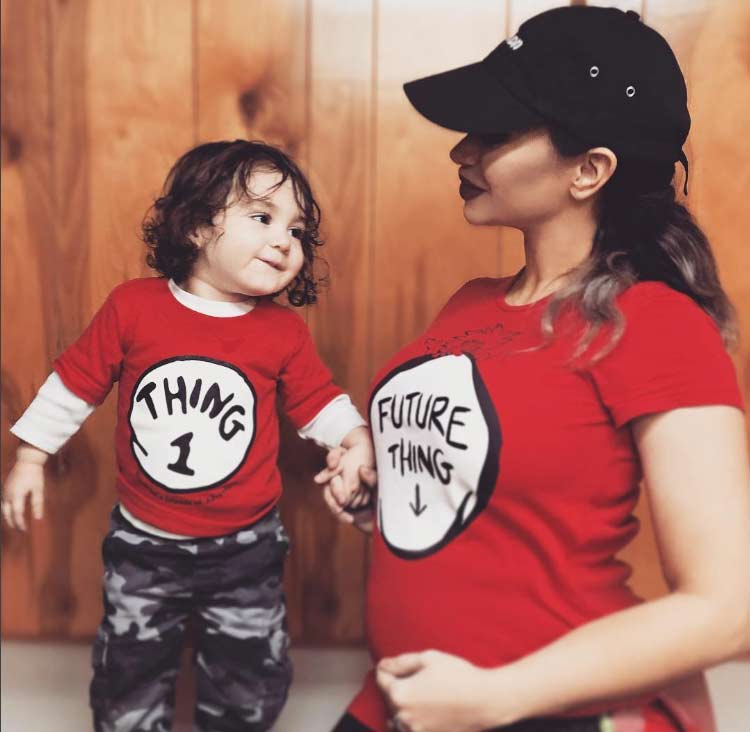 I asked if Reby expects the new baby to join the family business and become part of the show. She laughs and, with a wisdom that is usually unique to moms of more than one child, she tells me, “It’s impossible to know what the dynamic will be until baby gets here.”

Now the Broken Hardys appear to be back with WWE and Rebecca Hardy reports that she wore Maxel backstage at Wrestlemania to watch his daddy’s big return to WWE!

And in just a couple of months there will be another Broken Hardy to join the family and new baby boy Hardy is lucky to be joining a family that so clearly exhibits love, creativity, and humor in everything they do. Congratulations to Rebecca and Matt Hardy and thanks, Reby, for talking to me and letting me share some details about your family here! 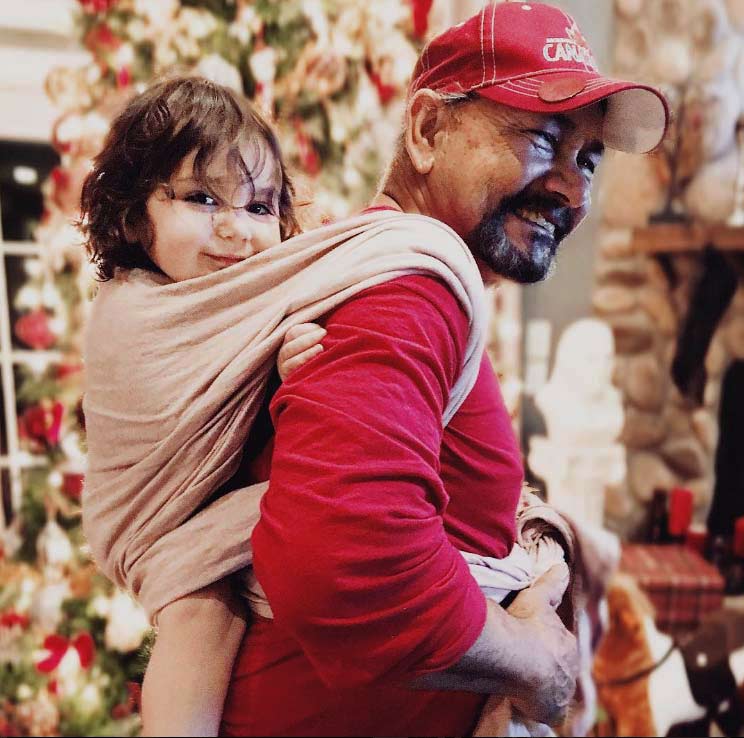 Señor Benjamin with grandson Maxel wrapped on his back in a woven wrap. 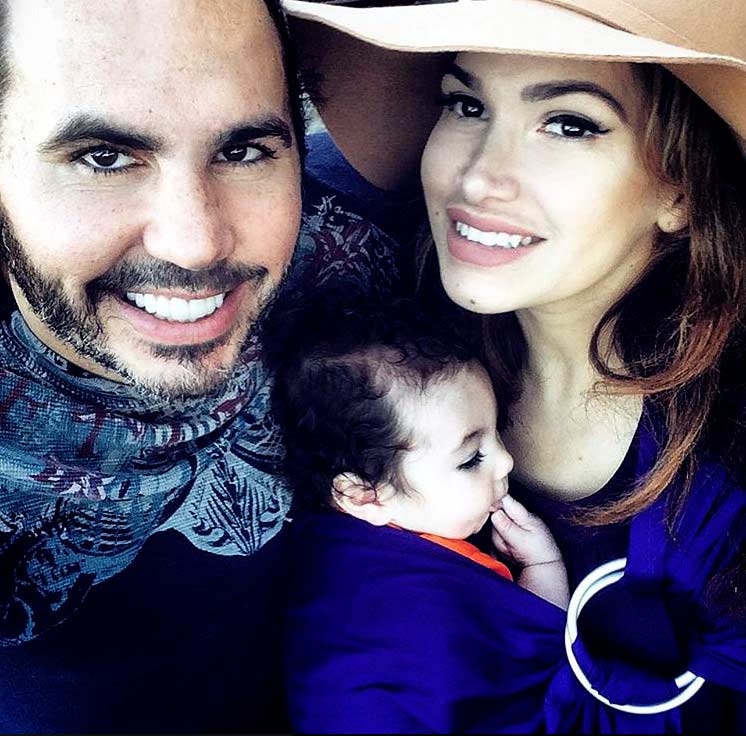 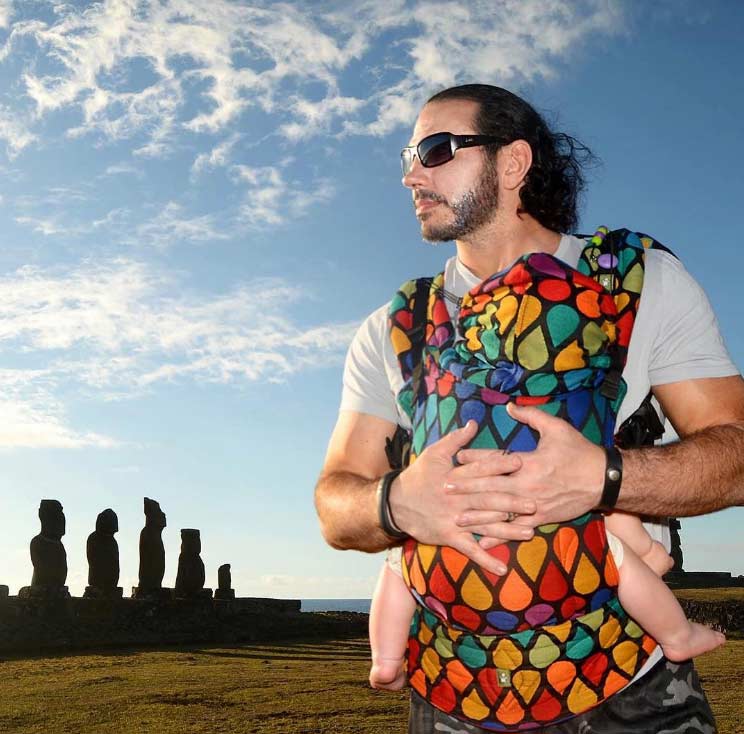 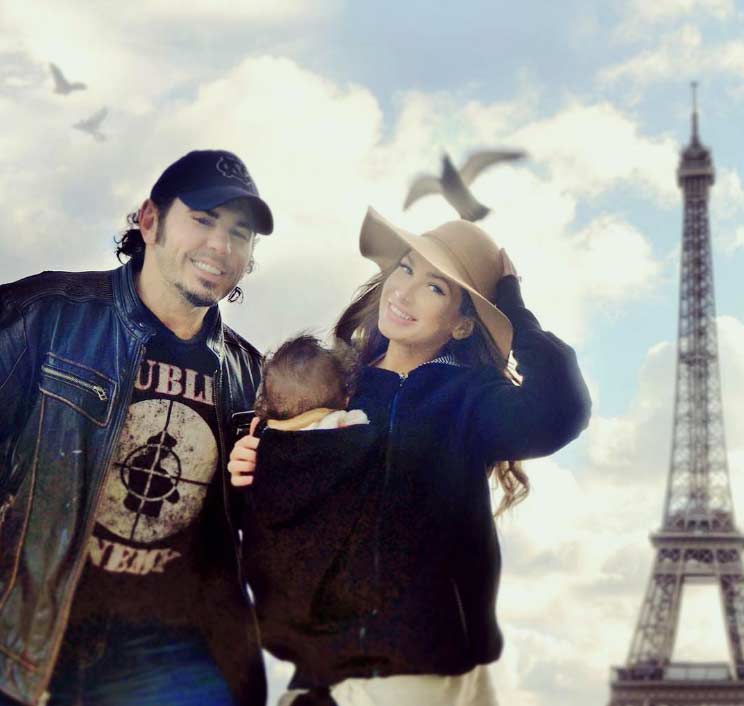 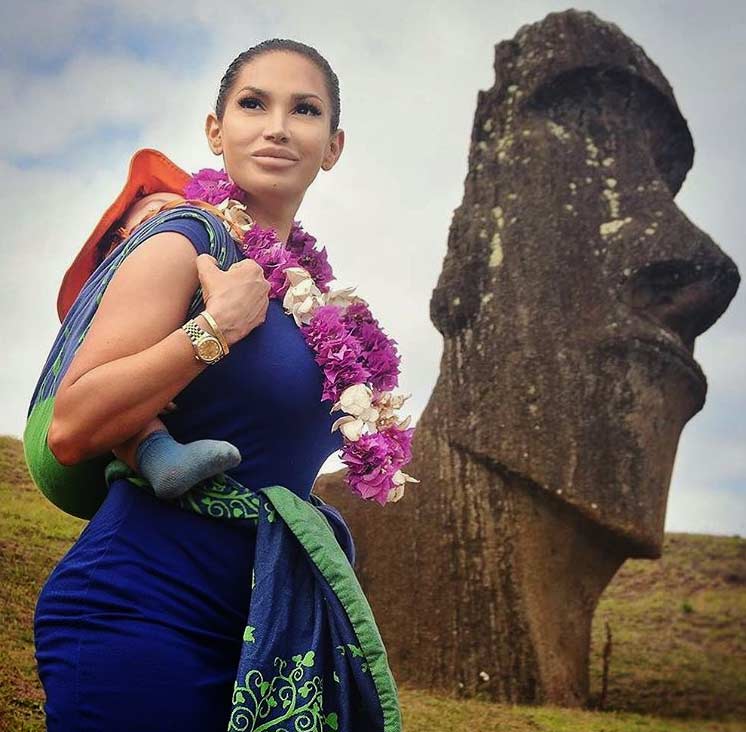 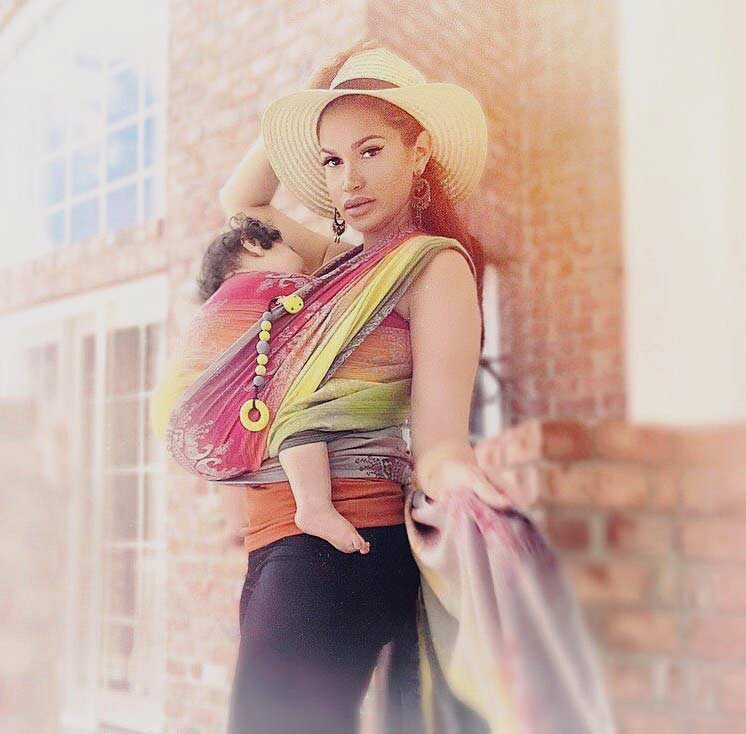 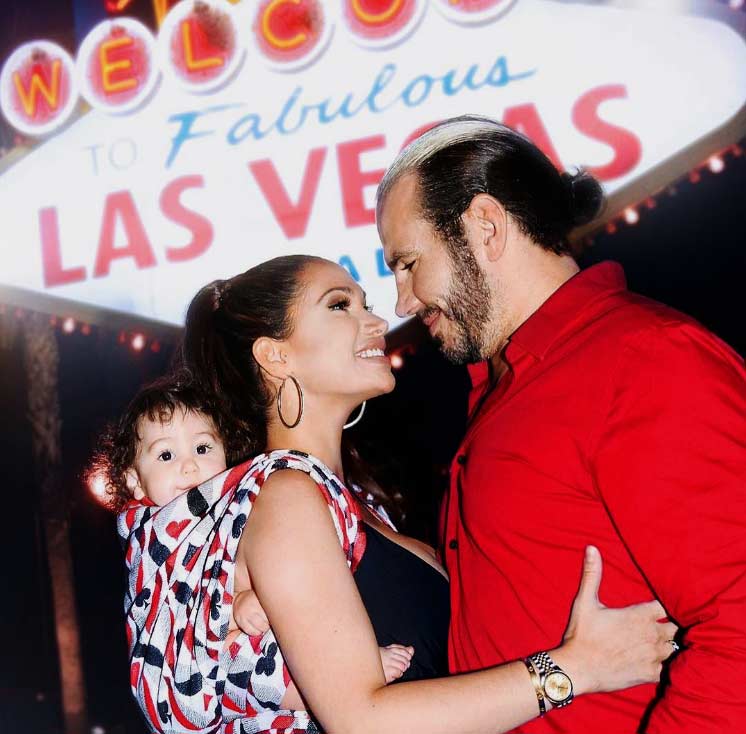 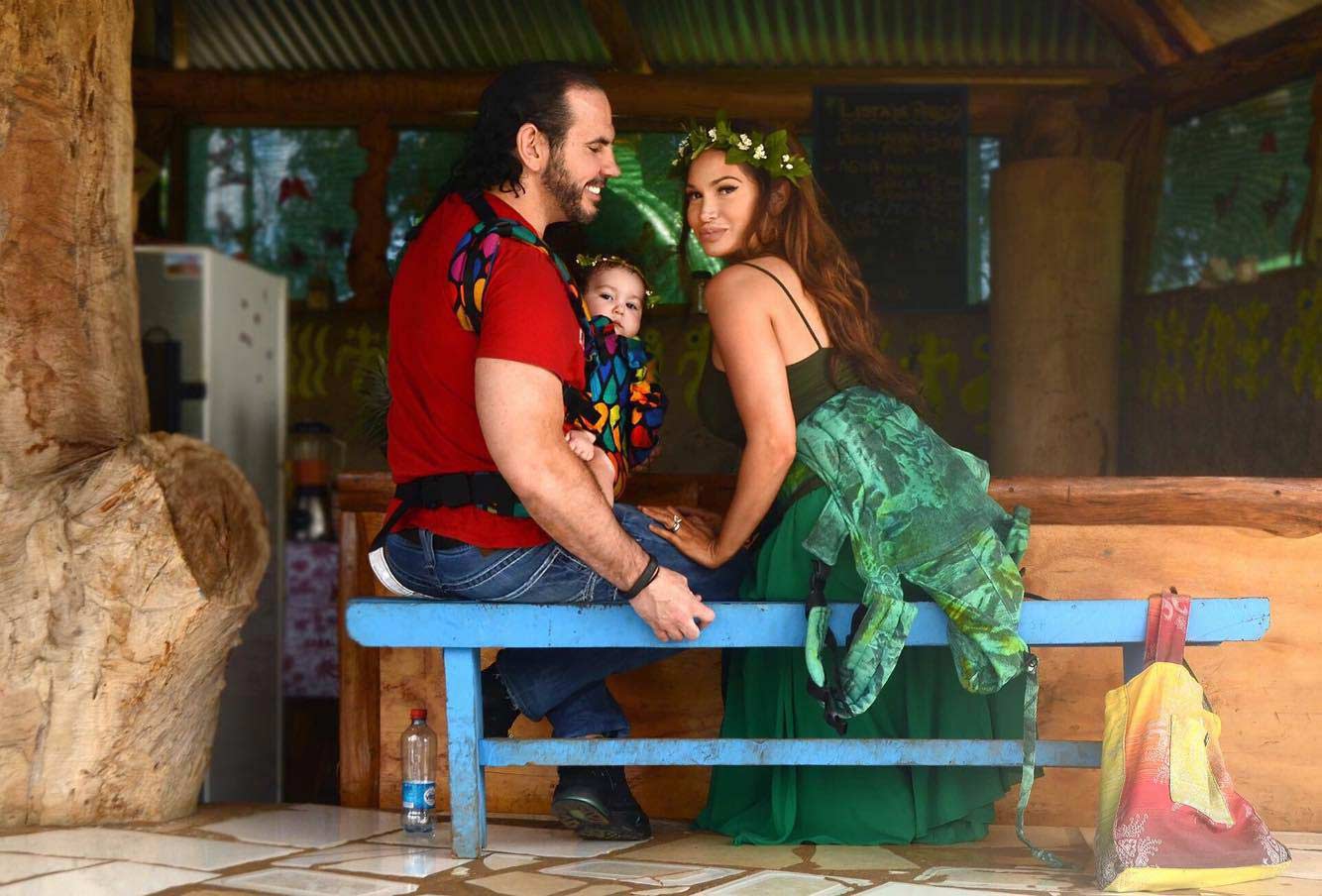