Due to the seventeen thousand obscene spam comments posted in one day to this article in it’s original incarnation, I had to delete the original post and am reprinting the text here.  AND, all comments will now require approval prior to posting!  Here’s the blog post again for all the real readers:

It’s not that I don’t think moms everywhere can use all the help they can get.  As far as I’m concerned, mothering is the most valuable  job there is and I don’t know a single mother who thinks it’s easy.

So I apologize in advance to all the moms who carry around the infant car seat, but I don’t think we should make it easier to carry! 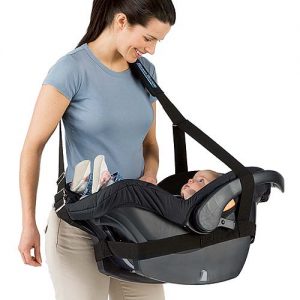 Holding your baby is one of the best things you can do for your baby.  Sure, this culture makes it difficult sometimes.  While driving, for example.  And that’s why the car seat was invented.  But putting a handle on it was going too far, and putting a strap on it is another step in the wrong direction.

I do not condemn a parent for using the infant car seat to carry their baby.  But it’s an inconvenience that should remain inconvenient to encourage us to find a better way

Arguments for the car seat harness:

It won’t increase infant seat use, just make it easier for when it is used. I disagree–new moms are bombarded with gadgets to make their lives easier that really won’t.  And those gadgets get in the way of their finding out about the simple things that can make a difference…like a functional baby carrier.

It’s easier on mother and baby to let the baby continue sleeping peacefully when you get to your destination. Easier, maybe, but not better.  Most babies can be transferred easily from carseat to a wraparound baby carrier without waking up, or will settle right back to sleep with their heads against our hearts.  For those who insist that their baby will wake up and scream through the entire errand, may I recommend learning to nurse in the wrap?  It’s a rare baby who isn’t appeased by the boob.

With more than one young child, the infant car seat is a necessity. I applaud parents of multiple children.  I want a herd myself.  But the more kids you have to wrangle, the more you need your baby content and your hands free.  It is the wrap, not the carseat, that will provide that.  In the wrap you are not carrying significantly more weight than your baby.  You have two free hands.  You are able to run if need be.  You can pick up an older child.  You can hug other children.

You can’t wear a baby when you are pregnant. Yes you can!  Much more comfortably than you can carry an infant carseat, which I would not think would be advisable while pregnant!

It makes eating in a restaurant so much easier. First, I find it very easy to eat in a restaurant while wearing my baby.  If I’m eating with family, I usually don’t even get to wear her because everyone wants a turn and she is passed around.  Second, even if it made it easier, it is not worth it to me.  Being there for your baby, physically, is so much more valuable!

There’s no sense taking baby out of the warm carseat in frigid weather. This is the argument I am most sympathetic with.  But I still wouldn’t do it.  The wrap is a very warm place, and transferring baby into a pretied front carry takes less than a minute, so unless it was really cold, I would do this, and close my coat over both of us.  When it’s seriously cold, I suppose one could climb into the car to transfer the baby with the door closed, if possible.  Or carry the carseat inside and then remove baby, but if you’re at the mall, you still have to carry the carseat at this point!  So I would expect to limit mall trips on freezing days.

I don’t actually hold my baby constantly.  I pass her off to friends and family.  I put her down on a blanket on the floor or on the grass.  She sleeps in our bed, not on my chest.  But when we’re running errands?  That’s not a time to put her down.  That’s a time to keep her close.

And for those parents who find the occasional use for the infant car seat, that’s fine.  But let the inconvenience of the thing give you pause to consider whether the situation really warrants it!